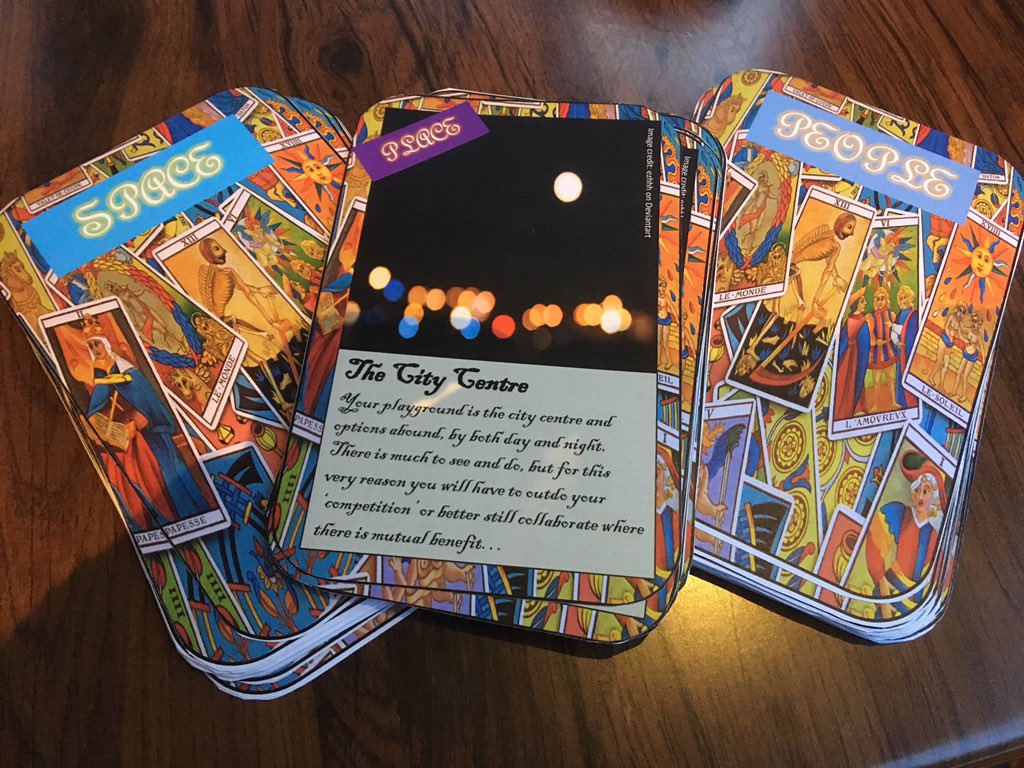 At the very end of November 2018 the core PER team (Leah Fitzsimmons and myself, Caroline Gillett) travelled up to Edinburgh for what was the National Co-ordinating Centre for Public Engagement’s (NCCPE) 10th birthday year and their 10th ENGAGE event. For those who don’t know, ENGAGE is the annual conference for public engagement enthusiasts and professionals, lovingly organized each year by the NCCPE and historically always held in Bristol, making this year a rather special affair in Edinburgh’s majestic Assembly Rooms. The conference always sells out fast and the mix of attendees tends to be predominantly public engagement professionals from universities far and wide (including Canada, Thailand, India etc.) as well as other professionals from charities and the cultural sector. However, more and more community organization representatives are joining which is great to see and there has been a bursary scheme in place previously to aid the participation of those who might otherwise be unable to come. This year’s conference theme was ‘Facing the Future’. It was obviously a great excuse to see Catalyst Seed Fund friends, funders and of course public engagement stalwarts Sophie Duncan and Paul Manners, who together co-direct the NCCPE. In addition to being at the conference and hearing about all things new, our team had two additional reasons for being there this year… 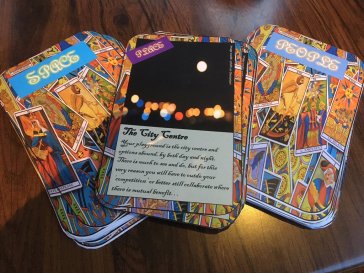 Sometime in very early 2018 I submitted a whimsical proposal for a workshop which was at the time called ‘Public Engagement Tarot’, playing into the Facing the Future theme. Luckily, my proposal was accepted into the conference programme, but upon Sophie Duncan’s sensible suggestion the title was changed to ‘Future spaces, places and people’ to be less potentially offensive – apologies Alejandro Jodorowsky (who I greatly admire) as well as any others who may hold Tarot sacred. No insult was ever intended! Despite the name change I stuck with the idea of a fortune telling card game involving evocative imagery and curio text, though changing The Tower card to The Ivory Tower was about as close to Tarot cards as these got. The net result were some rather fun looking cards which covered different places (localities), people (audience) and spaces (venues), as well as public engagement activities. 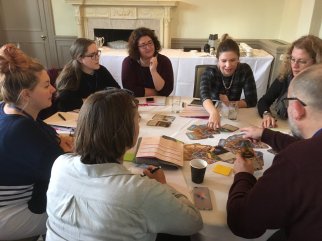 The idea was that you were dealt a ‘hand of fate’ comprising a mixture of these cards which your group would then have to work from to formulate future public engagement plans, requiring the group to scenario plan and perspective take in the process of navigating audience development ideas. To mimic reality we then come along halfway through the session and add fortune and jeopardy cards to the mix, forcing everyone to take their already established plans and evolve them to deal with new unexpected events, like venue locations burning down (think about the poor Glasgow School of Art!) or budgets being cut… you know, just like in real life. As any public engagement professional or event organiser will tell you, there must always be team tenacity for Plan B through to Z because things WILL happen and relationships need constant curation because of staff turnover, shifting priorities and all sorts of other good and bad things. 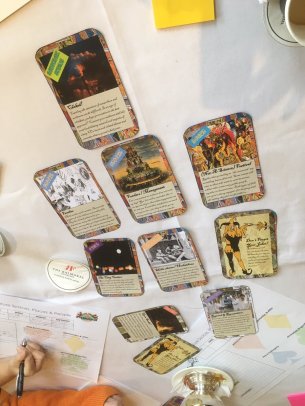 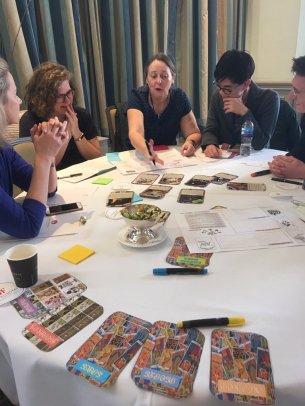 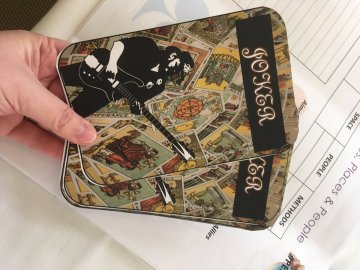 Leah then had the absolutely genius idea of adding Motorhead’s Lemmy as a ‘Joker’ card, which enabled players to veto another particularly troublesome card from the table to make playing our increasingly overcomplicated game bearable. I refer you to the lyrics of the rock classic ‘Ace of Spades’ if you are confused. Needless to say, if we can shoehorn in musical references into what we do as a team, we will.

Thankfully the ENGAGE crowd is a resilient and enthusiastic bunch who humoured us and even seemed to enjoy themselves – hurray! We’ve since had several public engagement teams/people approach us to request the resources for their own use. Maybe we should have trademarked them whilst we had a chance, but the public engagement world is a rather generous bunch who take the whole ‘sharing best practice’ thing to heart, so we shared. Insert meme of Del Boy reminiscing about one day being a millionaire! To conclude, we are actually looking at re-using our cards in future workshops and training sessions at UoB, so know knows you too may yet get to play PERot™… 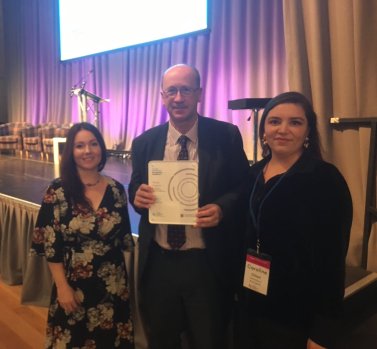 The second reason for going along was because around 18 months ago the University of Birmingham committed to being one of the very first institutions to take part in the Engage Watermark. This is a bench-marking assessment which grades the level of institutional support for public engagement. There are several different stages to the process which involved us providing lots of data sets and information, as well as scheduling a whole load of interviews with researchers, students, professional services, external partners, the Vice Chancellor and Human Resources. You may very well have contributed your thoughts as part of a survey which was sent to all academic staff – if so, thank you for feeding in. We also had to assess ourselves using the EDGE tool and based on this we hoped and aimed for Silver Award status. After receiving a long synthesised report of the NCCPE’s findings, we were then challenged again to put together an action plan report together outlining how we plan to improve over the next few years, which again was assessed. Fast-forward to ENGAGE 2018, where we finally learnt the outcome of the assessment as PVC for Research & Knowledge Transfer, Tim Softley was invited to accept a Silver Award on behalf of the University at the ceremony announcing Watermark outcomes. HOORAY! We now have a nice piece of Perspex to put up on a wall somewhere, so do look out for it. Of course the award is much more than just a pat on the back. It’s a symbol of our commitment to keep supporting our research community to do high quality public engagement, as well as a form of recognition for all those of you who already do great engagement work. You too are a recipient of this award!  Thank you and we hope you’ll continue to work with us as we begin the next phase of our journey, perhaps by taking part in one of the flagship opportunities our team have helped bring into existence like Research at the Heart of Brum or Lapworth Lates, or maybe by being part of signature event, our annual Public Engagement with Research Day (this year on April 5th, sign up HERE).

As for the rest of the conference, my highlights were:

Impact from the off: Developing research with communities

This was a panel discussion between Mukami McCrum MBE, Judy Wasige (Community Activist / Researcher) and Ima Jackson (Glasgow Caledonian University) who have been involved in research to enhance transcultural participation in policy and research, with a focus on Scotland’s National Action Plan to Prevent and Eradicate Female Genital Mutilation. I thought the women collectively asked some hard questions about the credibility of engagement practice and told some home truths about the difficulties communities have working with universities. For example, the often unreasonable delays in getting paid because of HEI finance processes which can be reputationally damaging for partnership building. 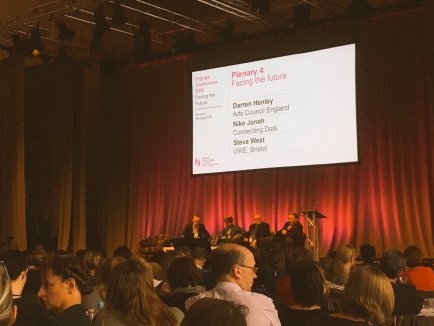 This was a plenary session with Steve West (University of the West of England); Darren Henley (Arts Council England) and Nike Jonah (Connecting Dots), who all gave their predictions for the future course of public engagement. I thought Nike’s talk about Standpoint Theory was especially fascinating and Steve also noted the need for Universities to be locally embedded and globally engaged, reminding HEIs of the need to embed public engagement as funding for culture change cannot be ongoing indefinitely.

So that’s about it from me! If you are interested in knowing more about ENGAGE have a look through the programme HERE or get a feel for the conference by checking out the #Engage2018 hashtag on Twitter. I tweeted quite a bit, so you can find some of my live musings there. Or drop into an upcoming Breakfast Brainstorm and I’d be happy to chat.